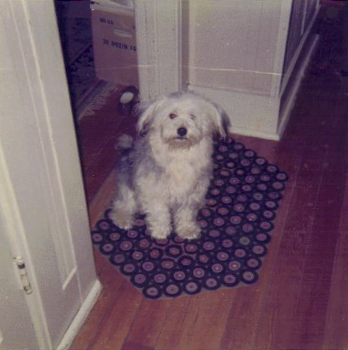 Late one evening at the beginning of January, a big storm with strong winds and freezing rain was moving in. I suddenly realized Cricket was not around.

I knew he had been outside earlier in the evening, but thought he had come in. I made one quick search around to make sure he was not in the house, he was not. I went out on the enclosed porch, opened the door and called for him several times. Then realizing he probably couldn’t hear me above the noise of the storm, I donned a hooded raincoat and went outside. I called and called, but no Cricket.

At last, in a brief lull in the velocity of the wind, I heard a faint tiny meow coming from the big cottonwood tree just above the house. I got a flashlight from the house and played the light up into the tree, and he was there on a limb far above me. Both he and the limb were covered with ice. I knew I had to get him down, as the temperature was going to drop below zero and he was still a kitten, not quite half grown yet, and he would freeze to death.

Jerry and Lisa were both asleep, and I really didn’t want to get them out of bed, and out in this mess in the middle of the night. Besides, only one person was going to be able to climb up there to get him. Our aluminum ladder was lying nearby, along the upper side of the house, where it had been left when the winter storm windows were put on earlier in the Fall. Of course, the ladder was also ice covered, so it was treacherous climbing up until I was as close as I could get to the branch he was on, next to the trunk of the tree.

He was meowing pitifully, and desperately wanted to come to me, but the thick ice covering the branch was just too slippery. Each time he tried to move he would begin to slip and quickly retreat to the tree trunk. I was chilled to the bone by this time, but I knew I just had to keep reaching out to him and coaxing him to come to me.

After what seemed an eternity, he finally moved just a little way along the limb… then another long wait, and more coaxing, and he would get just a little bit closer. With each attempt we kept making a tiny bit of progress, until I was finally able to reach out, grasp hold of his fur and pull him toward me.

Cricket was shivering uncontrollably. and my hands were half frozen, so holding onto him and getting back down the ladder was scary. At last we were on the ground and made our way in the house.

He was soaking wet, and I got towels and dried him off. He was one mighty glad kitty to be back in the house where it was warm and dry! As was I. We both survived the ordeal just fine, but I would not want to do it again! 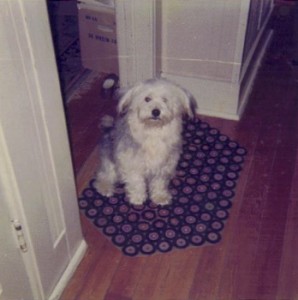 It was quite a winter! By March 10, we’d had our driveway plowed a total of 9 times, but finally the weather began to break and we had some springlike days.

How good it was to hear the first Meadowlark singing, and in a few days the snow had melted enough that the run off waters were rushing through the bottom land. Lisa wanted to go down to the “brook,”as she called it, so I left my Friday cleaning and we went down. It was a big adventure for her, and I enjoyed it too!

On March 30, we acquired a new dog! We regularly bought our milk at a dairy on the other side of town. We were always greeted by an adorable little Wheaton Terrier type dog, which Lisa and I both loved, and made a fuss over.

On this day, the lady who owned the dairy, said, “Why don’t you take that dog home with you?” She then added that someone had dropped the dog off in their driveway, and they didn’t really want a dog. They called the dog, “Charlie.” Well, there was always room for one more dog, so we took Charlie home with us.