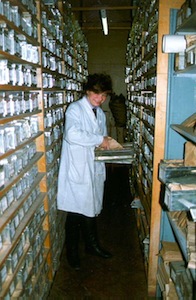 We put money in banks to keep it safe, so it will be there when we need it. In the same way, seeds are put in special facilities, called seed banks, which keep them safe and extend their viability, so they will be available for many years. Seeds are tiny miracles, each containing a plant embryo, plant food (called endosperm), and a covering to protect the embryo from the elements. Each seed, like each person, has its own genetic makeup.  Seeds differ within and between populations of a species. Seed banks strive to preserve as much diversity as possible by housing multiple collections of species and their varieties.

All of our food crops began as wild plants, plants that people through chance or design found to be edible and then began to cultivate. By doing so, they selected out and multiplied a small section of the total genome found in the wild plants. Over time, modern crops have come to represent only a fraction of the diversity of the original species. This sameness in crop plants results in greater vulnerability to disease and pest species. The limited genetics which give crops their reliable yields also give disease agents and insects a vast supply of similar material upon which to work to “crack the code” of resistance, leading to reduced yields and greater food costs.

One of the main reasons keeping samples of the original crop species and heirloom varieties has value is the variety of traits (including disease and pest resistance) they hold in their genetic codes. Answers to questions, some yet unasked, may be found in them. In addition to threats from disease and plant pests, climate change may also require us to look to the original wild plants for help in crafting crop varieties that will be productive under conditions different than those of today. The Pavlovsk Station facility; part of one of the world’s oldest seed banks, the Vavilov Institute of Plant Industry in St. Petersburg, Russia, may be lost.

The Pavlovsk Station is Europe’s largest repository of rare berries and fruit (5700 total varieties), according to a recent article that appeared in Nature, and is threatened by the Russian Housing Development Foundation (RHDF). The RHDF is a government agency whose mission is to build housing on agricultural land that is being used “inefficiently.” The Pavlovsk Station is on land prized for development, and because the Station is part of the non-profit Vavilov Research Institute, its 70 hectares of land are considered “unprofitable” to the government.

Russian botanist Nikolai Vavilov founded the seed bank in 1926. Vavilov is considered by many to be the father of the modern seed bank, gathering seeds of the wild progenitors of many crop plants, such as potatoes, peas, lentils and rice, as well as a myriad of cultivated varieties.

Scientists managing the seed stock believed they had a sacred duty to protect it. When Nazis invaded Leningrad (St. Petersburg) in 1941, many of them died to save the seeds and 6000 varieties of potatoes belonging to the research station. Refusing to consider the seeds and potatoes as food, approximately thirty scientists and staff died of starvation; the curator of the rice collection died surrounded by bags of rice rather than eat it.

While we are not facing actual starvation today – we are facing a shortage of genetic diversity in our food system. A handful of potato varieties, just a few apples, one or two tomatoes – the current food system depends on standardization to function efficiently.

The huge seed companies that control almost all the commercial seed production in North America are patenting the genes in their seeds to prevent farmers from saving and planting the seed for the next growing season.

Without the ability to preserve the power and potential hidden in the seed stock stored in national and non-profit seed banks, we are putting ourselves at increased risk as climate change modifies growing conditions. These seed banks are our insurance policy for the world’s food supply.

As of January, 2011, no permanent solution has been found for the Pavlovsk station yet, but the 50,000 signatures collected so far helped give the station a temporary reprieve from the bulldozers. (Read more here.)

Ellen Kuhlmann received a M.S. in Biology with an emphasis in plant ecology from Western Washington University in 1994.  She worked for the U.S. Forest Service as a field and research botanist for over 15 years. For the past 5 years, Ellen has been the Seeds of Success Program Manager for Rare Plant Care and Conservation, a Seattle-based nonprofit. Seeds of Success collects wild plant seed for the Kew Millennium Seed Bank run by the Royal Botanic Gardens, Kew of the U.K., and for the U.S. National Native Plant Materials Program.

One thought on “Seed Banks – Our Insurance Policy for Food”